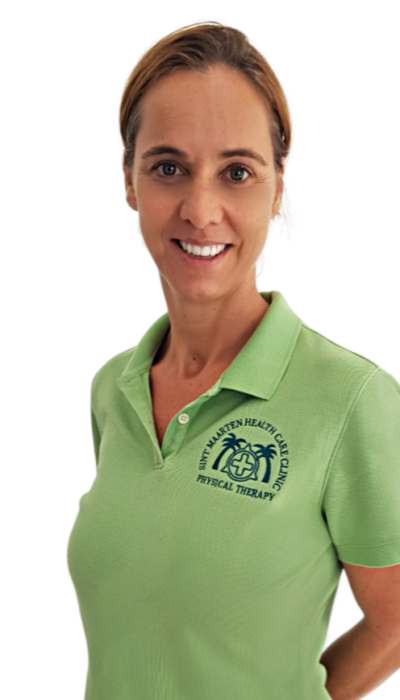 Debbie graduated in 1999 from Hogeschool Eindhoven (The Netherlands) with a Bachelor's degree in Physiotherapy. She completed her study for Orthopaedic Manual Therapy in Delft/ Utrecht in the Netherlands in 2003. Because of her particular interest in Sports Therapy she attended to the International Academy for Sport Science in Gennep (The Netherlands) in 2005 and specialized in active rehabilitation of the spine. Furthermore in 2005 she followed the Bobath (SCI-art) basic course in Pforzheim (Germany), which consists of constraint induced movement therapy for neurological patients. Between 1999-2006 she worked as a Physiotherapist/ Orthopaedic Manual Therapist at a private clinic in Mönchengladbach (Germany). She has been working at St. Maarten Health Care Clinic since 2006 where she also occupies the position as Operational Manager. She works mainly in the clinic and St. Maarten Medical Center (hospital). In 2007 she developed an interest in foot and gait analysis. With additional education she decided to create the possibility of making orthotics (insoles) in cooperation with Footmaxx. Due to the development of a cardiology department within St. Maarten Medical Center she specialized herself in cardiac rehabilitation in Papendal in 2013 (The Netherlands). Since 2015 she is also certified for Dry Needling. Besides that she holds the position of Vice-President of the new established (2018) Paramedical Association Sint Maarten.

Corona update: the safety of staff and patients is our highest priority. Therefore the entire team has been vaccinated. A face covering or a face mask is required, if you visit us for an appointment. Our team is working hard to be safe and continue to provide the best possible care. Stay safe, stay healthy, be smart and get vaccinated!